Babies can feel emotions but not rationalise them. If they are left to feel fear or stress, their brain releases stress hormones.

Howard Chilton has probably cradled a small percentage of Sydney’s locally born population in his arms. The specialist in newborn babies has devoted his career to the pointy end of medicine, keeping alive infants the size of a matchbox and inventing medical devices to help his work.

But after three decades, two of which he was director of pediatrics at the Royal Hospital for Women, the respected doctor has turned his attention to their often-anxious parents, risking facing the ire of many women in the heated debate on mothercraft.

He is conducting a quiet crusade against the so-called Cruella De Vils of parenting advice who can whip up more controversy in a sleep-deprived household than Richard Nixon by exhorting mothers to make their babies sleep on command through routines.

“I desperately want parents to enjoy their babies,” he says. “Mostly I call myself a reassurologist.”

But he asks a bit more of parents than that they just have fun. “If you want to have an independent baby, love-bomb them,” he declares. Feed them, cuddle them, let them rule your world. For the first six months of their lives at least.

Taking on the supernannies is a brave move on anyone’s part for a man it’s particularly bold. “I have a major, major disadvantage. I’m the wrong gender, although I do feel girly,” he jokes. He believes an inevitable prejudice arises because he has not gone through the sleepless nights and breastfeeding. And it’s true. His wife Tamara, a nurse who he married in 1983, didn’t need his help in raising their now-adult daughters, he says. But it’s the anecdotal evidence showered from other mothers and self-styled experts that he wants new parents to disregard.

Babies seems to have ruled Chilton’s world for most of his career. At home in the evenings, for years he threw himself into electronics to develop devices that would improve the care of the tiny infants that he treats as a neonatal pediatrician. He travelled to China this month where he is setting up a new manufacturing base for the phototherapy masks he developed to improve the treatment of jaundiced babies.

After China, he plans to back away from electronics. But new interests have replaced old ones. He wants to convince health authorities to fund human milk banks across Australia for infants who need breast milk. Despite the fact that such services are common in other developed countries, he seems remarkably patient with the slow progress here. “They will move at their own speed,” he says.

Meanwhile, Chilton has been prepared to put his money where his mouth is. Gold Coast nurse Marea Ryan told Extra that Chilton had personally lent her private charity $50,000 to import its first milk pasteuriser while it waits for government funds.

“It’s the White Cross, rather than the Red Cross,” Ryan says.

Perhaps more engrossing is his passion for educating parents against trying to create order in their new life with a tiny baby. Still a visiting medical officer at the Royal and in private practice, he wants to ensure such ideas for infants aged younger than six months are banished for good.

Every Thursday morning he meets new parents at the Royal to deliver his message. His group talk started because he found he was being asked the same questions again and again. The most pressing being how to settle a crying, distressed baby.

“I enjoy one-on-ones but one on 30 is a more efficient way of helping parents, reassuring parents that they are capable of looking after their baby.”

His introduction to parenthood has blossomed into an hour-long guided tour that begins with evolution. Humans are born premature, with brains that are only 25 per cent formed. Because humans walk on two feet, the birth canal in women is too narrow to allow a large, more fully developed brain to fit through the pelvis.

Because babies are therefore not fully formed at birth, parents should replicate the baby’s experience in the womb by providing a secure, quiet and well-fed environment for the first months after birth. He tells mothers to ignore age-old rules of mothercraft, urging them not to bother burping their babies, to breastfeed them (if possible) as much the baby wants, to sleep with them (under correct conditions) and not to let them get distressed if avoidable. Chilton has been known to urge his audience to throw out any copies of the likes of best-selling author Gina Ford, the nanny who promises to bring order to new parents’ life with a rigid set of sleeping and feeding routines.

“I think the [likes of] Gina Ford are attractive to a small section of the population, usually career women who want their babies to fit into a template … teachers and accountants, people who really like things to be timetabled,” he says.

In reality, only about 15 per cent of babies conform to sleeping and eating at the whim of the parent. The rest pay no heed to day and night and end up crying to be held or fed. “I know a lot of people who sob over Gina Ford because it just doesn’t work for them or their baby.”

Chilton also has a book, Baby On Board, in which he warns of the effects of repeatedly leaving babies less than six months old to cry: “Without therapy or a change in their life, these babies can grow up into people who panic and fly off the handle when things aren’t going well, who are prone to depression and anxiety, and may use alcohol and other drugs in an attempt to blunt the way they feel about themselves and their world. The seeds of such life are sown in the nursery.”

Chilton bases this claim on neurobiological research. Evidence collected in the past decade shows it is during the early months after birth that crucial connections are established in the brain between the limbic system, where emotions are experienced and the neocortex, the part of the brain that rationalises experience. Babies can feel emotions but not rationalise them. If they are left to feel fear or stress, their brain releases stress hormones such as cortisol and adrenalin. If it happens in a sustained way, perhaps by parents trying to make them sleep on demand, their brains anticipate further stress as a matter of course.

Chilton acknowledges that his views may make parents even more anxious about such an enormous responsibility. It might sound sweet to “love-bomb” your baby but could you bear the guilt if you don’t? And what if your child grows up to experience depression or anxiety? Even though you tried, could you have loved him that little bit more?

At the same time he admits that the brain is highly “plastic”. “Just because you have a problem in your first year doesn’t mean you will have a problem later,” he says, the reassurologist in him returning.

But Robin Barker, the best-selling author of another care manual Baby Love, says parents are being made to feel guilty no matter what they do, whether they leave their babies to cry or comfort them every time they whimper.

“One way or another parents have to work out how they are going to deal with this sleep business. I don’t think they are being given a fair go at the moment … in the end, by the time they are 21, if they come from happy homes, what’s the difference?”

She says the medical establishment has done far worse than leave babies to cry. When she trained as a pediatric nurse in Sydney in the early 1960s, parents were only allowed to visit their babies or toddlers for an hour a day. “We have done horrendous things to children.” Barker describes Chilton as a great doctor whose views on myth-prone topics such as circumcision and teething she often agrees with, but warns that Chilton risks causing the very guilt he seeks to alleviate.

Babies took over Chilton’s world by accident. Born in Yorkshire to parents who were both teachers, he studied medicine in London and then moved to South Africa in search of surf while training as an intern. He ended up working as a senior physician in the public hospital of Harare, Zimbabwe, then still called Salisbury, the capital of the British colony of Rhodesia. After two to three days on the ward as a senior physician, he fell in love with his tiny patients.

“You could be so helpful to them and they were so cute,” he recalls. “We had no ventilators, we had few enough incubators. Babies were looked after in hot rooms.” He was hooked. “I just found babies enormously attractive. It’s the only branch of medicine where all of your patients are potentially healthy. You are not repairing damage. Even premature babies aren’t necessarily sick. You are preventing them from getting sick and they have an 80-year lifespan after that.”

Since he started his specialty, doctors have worked out how to keep babies alive from as young as 24 weeks, whereas they could only survive from 28 weeks when he started. But he now feels that intensity of such work is for younger doctors.

Hung on the wall of his consulting rooms is a portrait of a baby the size of a Redheads matchbox, now aged about 20. He remembers her as Nicole but has forgotten her surname. Not bad for a doctor who guesses he has treated tens of thousands of babies.

The reward of supporting new life outweighed the dreadful part of the job: working with parents who lose their child. Early on he realised how sensitive parents are to the slightest offhand comment by a doctor, recalling a mother who had her son of about four years old rugged up on a warm day. She had been told that her child had weak lungs. But in fact, it was a short-term condition that only affected him for his first two days of life.

“One has to be careful putting the seeds of doubt into parents because they are so vulnerable. When I get [medical] students here, that aspect is something I concentrate on, making sure they are kind.”

Chilton did not watch the controversial BBC series Bringing Up Baby when it aired on the ABC, featuring three different approaches to baby care, following the theories that have come in and out of favour over the past century.

However, colleagues delighted in taunting him with stories of how nanny Claire Verity, the original Cruella De Vil of baby care, would leave children to cry, often outside in the British elements.

“If I had seen it it would have driven me up the wall,” he says.

“All I can do is write my books and give my talks and hope that it filters through.”

This story first appeared in the ‘Extra’ magazine, in the Sun-Herald and Sunday Age. 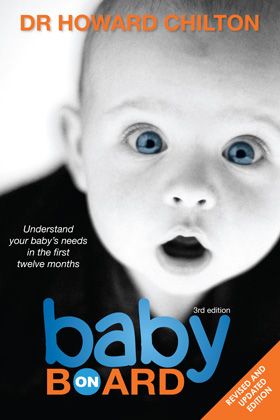